This is utterly unbelievable. Even with all the craziness the rightwingers and Republicans have been up to, I am genuinely surprised by this. 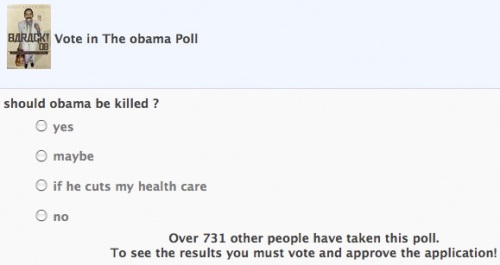 Not so much about the sentiment. That, sadly, is unsurprising. What I am surprised by is that anyone would be so clueless as to create or vote affirmatively in this poll.

The feds are not happy.

In the wake of Dr Tiller’s assassination by right wing terrorist Scott Roeder, many on the right are revealing a lot about their thought processes.

“Operation Rescue” head Randall Terry said he “reaped what he sowed,” meaning he got what he deserved. Then he tried to mooch beer and hot wings off of the gaggle at the National Press Club.

The majority of the erstwhile saviors of the Republican Brand at redstate, to their credit, are denouncing the assassination. But there are exceptions and these exceptions, as with others on the far far right exhibiting bad behavior, are not being banned as is almost always the case for someone on the left who makes remarks that are deemed outside the bounds of their version of acceptable discourse. Along with calling Tiller a murderer, the other major tone of their discussion, however, is how the mean ole leftists and lib’rul media will use this murder to attack the right.

Bill O’Reilly takes the rationalization one step further and refuses to “backtrack” from his repeated assertions that Tiller should be called “Tiller the Baby Killer” and such gems as calling his clinic a “death mill” and comparing him to the Nazis.

And the list goes on and on and on.

So many on the right refuse to consider that their invectives might be the least bit responsible for this kind of domestic terrorism. But they are.

And, today, there have been no less than four front page posts about the killing of a military recruiter and wounding of another in Arkansas. They are claiming this black guy who converted to Islam, and who was acting alone, is a real terrorist and that the militant white Christian Roeder is merely an everyday murderer — nothing to see here folks. Move along.

No doubt they will keep flogging this. A commenter in one of their stories says it’s already on Drudge. I’m sure Limbaugh, O’Reilly, Hannity and the other drum beaters will run with it.

And, no doubt, it will work with “the base.” But to the vast majority outside the echo chamber, it will sound like what it is: shrill and lame attempts to rationalize their years and years of fear mongering.

One of the reasons McCain lost so badly last November is that people saw him casting about for any way to attack Obama, moving from one ridiculous tactic to another with no coherent strategy or vision. It was just a mad, frantic day to day scramble to find ways to bring down his opponent.

That also describes the behavior of the right for quite a while now, from long before the election right up to today. It is most recently evinced in their scatter shot attacks on Sonia Sotomayor. They jump from one attack to the next without thinking. They are desperate and it shows. It is almost painful to watch.

Desperation is not something people like to see in political leaders or movements.

Update II: I would of course hope it would be clear from the tenor and tone of my post, but just to go on record: I of course condemn the killing of the recruiter and wounding of another. I don’t support the death penalty, but, if the accused is in fact guilty of the murder and attempted murder, he should spend most if not all of the rest of his life behind bars.